“We are celebrating the 200th anniversary of Greek independence to come together, meet and socialize after the devastating quarantine of the pandemic,” said Vasiliki Filiotis, president of Hellenic Paideia of America, Inc. “We have an agenda rich with music, virtual program communication scholars and personalities in Greece, honoring people who have improved the quality of life of the community, recognizing university and graduate students for their outstanding progress, greetings and important addresses community figures and a free dinner of Greek cuisine. ”Ms. Filiotis inspired community leaders to present an uplifting program.

A unique event was organized on Sunday November 7, 2021 by the Hellenic Paideia of America Mrs. Stella Kokolis President of the Federation of Hellenic Educators and Cultural Associations of America, President Meropi Kyriakou, President of the Association of Greek Teachers “Prometheus” at Minos Kritiko Spiti at 32-23 33rd Street, Astoria, New York State.

“The 200e Anniversary of the Greek Revolution of 1821: Honoring the memory of the heroes of 1821 ”was exceptional. The program and the winners included: Protopresbytere FR. Telemachus Stamkopoulos, prayer; American and Greek national anthems sung by Rafanlia; Greetings from Ms Vasiliki Filiotis, President of Hellenic Paideia of America: Ms Stella Kokolis President of the Federation of Hellenic Educators and Cultural Associations of America, President Meropi Kyriakou, President of the Association of Greek Teachers “Prometheus”, Consul Dimitris Papageorgiou of Hellenic Consulate General of New York, Rhode Island State Senator Leonidas P. Raptakis, Representative of Congresswoman Nicole Malliotakis (NY-11); Zeta Makri, Greek Ministry of Education and Religion; The Secretary General of the Hellenes Abroad and Public Diplomacy Giannis Chrysoulakis; Sofia Zaharaki, Deputy Minister of Tourism · Government of the Hellenic Republic; Alexandros Komtsi, Department of Education of Greece and Cyprus; virtual presentation on the Filiki Eteria museum in Odessa, Ukraine by Professor Giorgos Alevra of the University of West Macedonia, Eirini Grapsia, editor-in-chief of the Journal; educator Angeliki Vourna on “Highlights of the Greek Revolution of 1821” and others This is an incomplete list of the program. For a more precise description, please contact Ms. Stella Kokolis at 917 744-9226 and 718 844-0902.

The keynote speaker was Prof. Giorgos Alevra from University of Western Macedonia who made a virtual presentation of the Filiki Eteria Museum in Odessa, Ukraine. “It all started in Odessa, Ukraine,” said Prof Alevras. “Greek merchants Nikolaos Skoufas, Anastasios Sakalof and Emanuel Xanthos founded the revolutionary group called Filiki Eteria or Society of Friends in 1814. Museum exhibits of an aristocratic business residence from the 1800s were presented.

Professor Alevras explained: “The Filiki Eteria Museum has been operating since 1979 as part of the Odessa Historical and Folk Art Museum. In 1994, the museum moved to its historic location, where members of the Filiki Eteria (“Friendly Society”) once met and where the HFC headquarters are today. In its new form, the museum was created and organized by the HFC in cooperation with the Historical and Folk Art Museum of Odessa, which provided the collection of exhibits relating to Filiki Eteria. It was then supplemented by replicas of exhibitions exhibited in museums in Greece. A new gallery focused on folk art has recently been inaugurated in the inner courtyard, displaying authentic objects that recreate the appearance of the residence of GI Maraslis, who owned the building in the first half of the 19th century.

Rhode Island State Senator Leonidas P. Raptakis drove over 2.5 hours in support of this unique event. “I support President Stella Kokolis and her associates even at the last moment,” State Senator Raptakis said. “Our best wishes to all Greek-American teachers for continuing the good work of perpetuating the Greek language and cultural heritage. “

“We learn from the memory of the heroes and heroines of the Greek revolution of 1821, the Greeks and the Phil-Helleans with their heroism. They sacrificed their lives in their belief in a free and independent Greek nation, ”said President Filiotis. “They fought and sacrificed their lives in their faith for Christianity. They successfully fought battles in the mountains for a free Greece. The revolution of 1821 with blood spilled on the ground, showed that a country was ready to fight to be free. The revolution of 1821 revealed how the Greeks had been slaves for hundreds of years and I’ve had enough! We have a responsibility to these people who established a free country. The heroes of 1821 gave us a legacy we must remember. 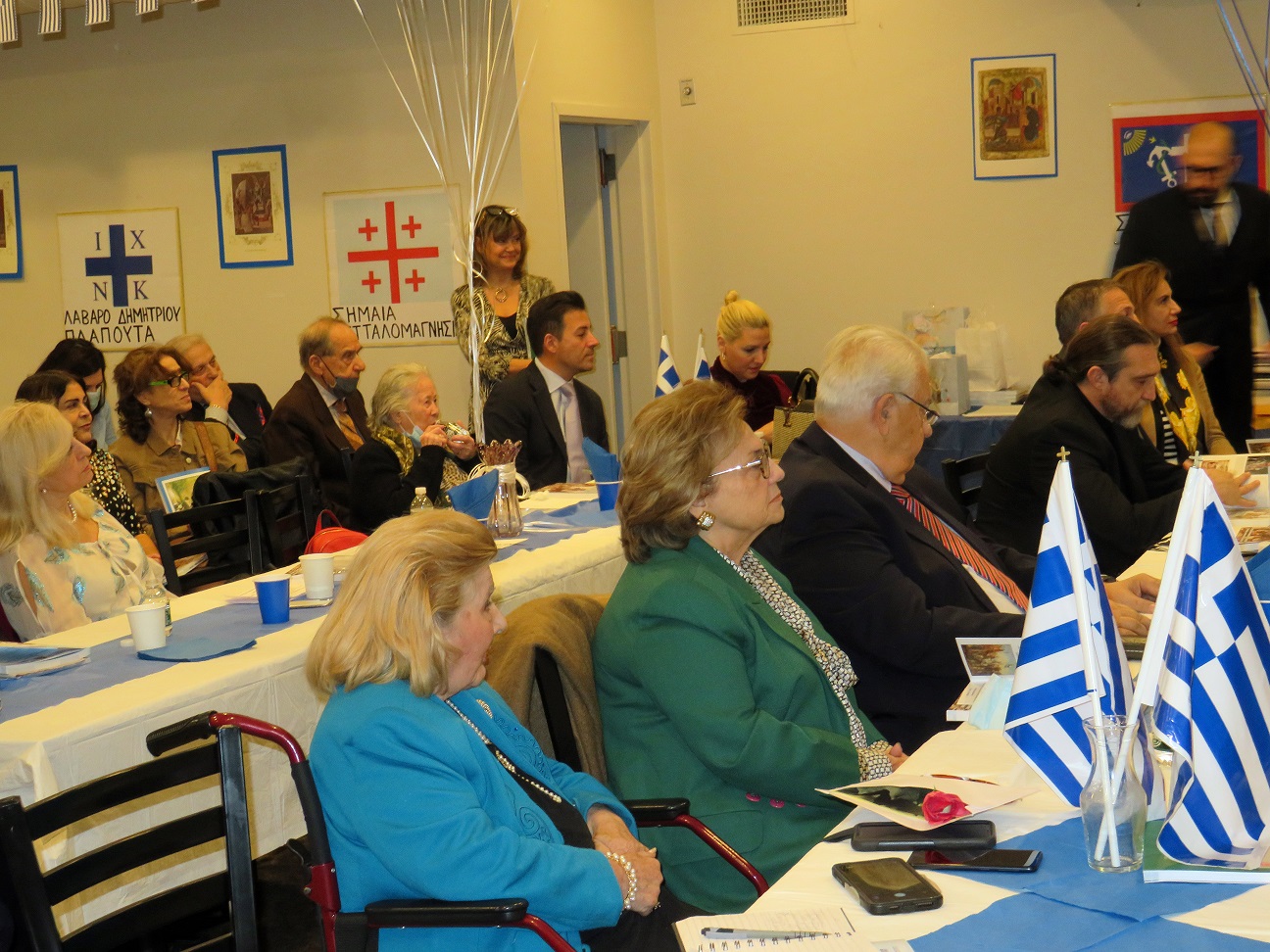 Ms. Filiotis continues: “The goal of the Hellenic organization Paideia is to encourage Greek Americans and their friends to speak the Greek language. We must leave a legacy for the next generation. European culture and civilization, of which our own country is a part, is rooted in ancient Greece. We must pass on to future generations the knowledge, the culture, the traditions preserved and transmitted. The Greek language survives today because it has offered a unique contribution to the world. Only the Greek language could communicate the Christian faith in the Gospels and the Epistles of Saint Paul.

President Stella Kokolis of the Hellenic-American Federation of Educators and Cultural Associations of America said: “It is our duty to nurture the values ​​of the Greek language and culture. Many sacrificed themselves to give us the land of freedom called Greece, our country, the country of the Greek diaspora, the cradle of democracy that continues to light up the world. It is our responsibility as Greek Americans to convey to the American public that there is more to Greece than democracy and civilization: The exceptional courage and fighting ability of the average man produced the remarkable Greek Revolution. that transformed Europe. The heroism of the Greek fighting force and civilians impressed the countries of Europe. Many stayed there and helped. It is our duty to nurture the rapidly disappearing values ​​of the Greek language and culture in the United States.

Ms. Meropi Kyriacou, Principal of the Cathedral School of New York, said: “We thank all of our sponsors and contributors to our journal book. The Historic Event Committee and Journal are: Stella Kokolis; Vasiliki Filiotis; Eirini Grapsia, Pandora Spelios; Georgia Filiotis; Anastasia Korfiatis and Marianthi Raptis. Principal Meropi Kyriakou and educator Eleftheria Ikouta were honored as “Educator of the Year” at the 30e Hermès Expo NJ Awards Dinner at the Grand Marquis Grand Marquis in Old Bridge, NJ on October 16 2021.

The business world and the medical community placed numerous advertisements in a newspaper of more than 200 pages. I noticed the ad from Dr George Liakeas, whom I have known from a young child. Dr Liakeas is our pandemic miracle. His courage and endurance are an example to follow. Dr Liakeas said: “We are proud of your concerted efforts to revitalize the language and education of Hellenic culture in the United States. Long live the immortal 1821! Long live the Hellenic nation. Dr Liakeas is a fellow of the Hellenic Medical Society of New York and Director of Lexington Medical Associates in New York.

Hellenic American Educators Association / UFT President Demi Savopoulos took three buses to show her support for the 200e Anniversary of the Greek Revolution. She said “our dedication to Hellenic principles and ideals is exceptional. We are passing the torch of Hellenism to our next generation.

Former Director of the Greek Afternoon Schools of St. Demetrios, Timoleon Kokkinos, said that “this cultural event brought together members of the Prometheus Greek Teachers Association. Hellenic culture has emphasized lapaideia since time immemorial, ”he said. “This ancient paideia (education) was the foundation of the greatest civilization the world has ever known.”

Mr. Kokkinos is a founding member of the Greek teachers’ association “Prometheus”. He was president of “Prometheus” in 1985-86. Dr George Melikokis, former principal of St. Demetrios School, Jamaica School, explained that “the presence of all honors our Hellenic heritage, our democratic values ​​and our ideas embodied in the Greek Revolution of 1821. Our efforts maintain Hellenism alive for the younger generations. Dr John Siolas, who presented awards to the students, praised their studies and work on the Greek language and civilization. A buffet of homemade Greek cuisine by Minos Kritiko Spiti concluded this historic in-person and virtual program.